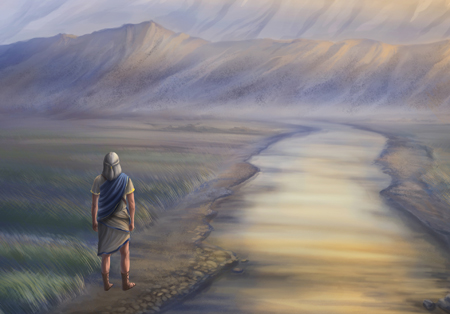 Daniel 10:1 -In the third year of Cyrus king of Persia a thing was revealed unto Daniel, whose name was called Belteshazzar; and the thing [was] true, but the time appointed [was] long: and he understood the thing, and had understanding of the vision.

Daniel 10:2 -In those days I Daniel was mourning three full weeks.

Daniel 10:3 -I ate no pleasant bread, neither came flesh nor wine in my mouth, neither did I anoint myself at all, till three whole weeks were fulfilled.

Daniel 10:4 -And in the four and twentieth day of the first month, as I was by the side of the great river, which [is] Hiddekel;

Genesis 2:10-14 -And a river went out of Eden to water the garden; and from thence it was parted, and became into four heads. The name of the first [is] Pison: that [is] it which compasseth the whole land of Havilah, where [there is] gold; And the gold of that land [is] good: there [is] bdellium and the onyx stone. And the name of the second river [is] Gihon: the same [is] it that compasseth the whole land of Ethiopia.  And the name of the third river [is] Hiddekel: that [is] it which goeth toward the east of Assyria. And the fourth river [is] Euphrates.

Daniel 10:5 -Then I lifted up mine eyes, and looked, and behold a certain man clothed in linen, whose loins [were] girded with fine gold of Uphaz:

Daniel 10:6 -His body also [was] like the beryl, and his face as the appearance of lightning, and his eyes as lamps of fire, and his arms and his feet like in colour to polished brass, and the voice of his words like the voice of a multitude.

Revelation 1:12-17 -And I turned to see the voice that spake with me. And being turned, I saw seven golden candlesticks; And in the midst of the seven candlesticks [one] like unto the Son of man, clothed with a garment down to the foot, and girt about the paps with a golden girdle. His head and [his] hairs [were] white like wool, as white as snow; and his eyes [were] as a flame of fire;  And his feet like unto fine brass, as if they burned in a furnace; and his voice as the sound of many waters.  And he had in his right hand seven stars: and out of his mouth went a sharp twoedged sword: and his countenance [was] as the sun shineth in his strength. And when I saw him, I fell at his feet as dead. And he laid his right hand upon me, saying unto me, Fear not; I am the first and the last.

Daniel 10:7 -And I Daniel alone saw the vision: for the men that were with me saw not the vision; but a great quaking fell upon them, so that they fled to hide themselves.

Revelation 6:15-17 -And the kings of the earth, and the great men, and the rich men, and the chief captains, and the mighty men, and every bondman, and every free man, hid themselves in the dens and in the rocks of the mountains;  And said to the mountains and rocks, Fall on us, and hide us from the face of him that sitteth on the throne, and from the wrath of the Lamb: For the great day of his wrath is come; and who shall be able to stand?

Daniel 10:8 -Therefore I was left alone, and saw this great vision, and there remained no strength in me: for my comeliness was turned in me into corruption, and I retained no strength.

Daniel 10:10 -And, behold, an hand touched me, which set me upon my knees and [upon] the palms of my hands.

Daniel 10:11 -And he said unto me, O Daniel, a man greatly beloved, understand the words that I speak unto thee, and stand upright: for unto thee am I now sent. And when he had spoken this word unto me, I stood trembling.

Daniel 10:12 -Then said he unto me, Fear not, Daniel: for from the first day that thou didst set thine heart to understand, and to chasten thyself before thy God, thy words were heard, and I am come for thy words.

Daniel 10:13 -But the prince of the kingdom of Persia withstood me one and twenty days: but, lo, Michael, one of the chief princes, came to help me; and I remained there with the kings of Persia.

Jude 1:9, "Yet Michael the archangel, when contending with the devil he disputed about the body of Moses, durst not bring against him a railing accusation, but said, The Lord rebuke thee."

Daniel 10:14 -Now I am come to make thee understand what shall befall thy people in the latter days: for yet the vision [is] for [many] days.

Daniel 10:15 -And when he had spoken such words unto me, I set my face toward the ground, and I became dumb.

Daniel 10:16 -And, behold, [one] like the similitude of the sons of men touched my lips: then I opened my mouth, and spake, and said unto him that stood before me, O my lord, by the vision my sorrows are turned upon me, and I have retained no strength.

Daniel 10:17 -For how can the servant of this my lord talk with this my lord? for as for me, straightway there remained no strength in me, neither is there breath left in me.

Daniel 10:18 -Then there came again and touched me [one] like the appearance of a man, and he strengthened me,

Daniel 10:20 -Then said he, Knowest thou wherefore I come unto thee? and now will I return to fight with the prince of Persia: and when I am gone forth, lo, the prince of Grecia shall come.

Daniel 10:21 -But I will show thee that which is noted in the scripture of truth: and [there is] none that holdeth with me in these things, but Michael your prince.