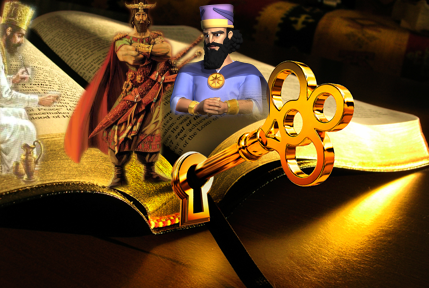 "The kings of the Earth"

Daniel 11:35 And some of them of understanding shall fall, to try them, and to purge, and to make them white, even to the time of the end: because it is yet for a time appointed.

James 1:3-4 Knowing this, that the trying of your faith worketh patience. But let patience have her perfect work, that ye may be perfect and entire, wanting nothing.

Daniel 11:36 And the king shall do according to his will; and he shall exalt himself, and magnify himself above every god, and shall speak marvellous things against the God of gods, and shall prosper till the indignation be accomplished: for that that is determined shall be done.

"See, sir, from this Chamber, I govern, not only to Paris, but to China; not only to China, but to all the world, without anyone knowing how i do it." (Tamburini, General of the Jesuits.)

Revelation 13:3 And I saw one of his heads as it were wounded to death; and his deadly wound was healed: and all the world wondered after the beast.

John 10:33 The Jews answered him, saying, For a good work we stone thee not; but for blasphemy; and because that thou, being a man, makest thyself God.

Mark 2:7 Why doth this [man] thus speak blasphemies? who can forgive sins but God only?

Acts 17:24 God that made the world and all things therein, seeing that he is Lord of heaven and earth, dwelleth not in temples made with hands;

Revelation 19:15 And out of his mouth goeth a sharp sword, that with it he should smite the nations: and he shall rule them with a rod of iron: and he treadeth the winepress of the fierceness and wrath of Almighty God.

Revelation 14:9,10 And the third angel followed them, saying with a loud voice, If any man worship the beast and his image, and receive [his] mark in his forehead, or in his hand, The same shall drink of the wine of the wrath of God, which is poured out without mixture into the cup of his indignation; and he shall be tormented with fire and brimstone in the presence of the holy angels, and in the presence of the Lamb:

Daniel 7:11 I beheld then because of the voice of the great words which the horn spake: I beheld [even] till the beast was slain, and his body destroyed, and given to the burning flame.

Daniel 11:37 Neither shall he regard the God of his fathers, nor the desire of women, nor regard any god: for he shall magnify himself above all.

1 Timothy 3:2 A bishop then must be blameless, the husband of one wife, vigilant, sober, of good behaviour, given to hospitality, apt to teach;

Daniel 11:38 But in his estate shall he honour the God of forces: and a god whom his fathers knew not shall he honour with gold, and silver, and with precious stones, and pleasant things.

NOTE: For the Pope --> Matthew 19:21 Jesus said unto him, If thou wilt be perfect, go [and] sell that thou hast, and give to the poor, and thou shalt have treasure in heaven: and come [and] follow me.

I pray this boy has his mansion soon in heaven....Matthew chapter 5.

Daniel 11:39 Thus shall he do in the most strong holds with a strange god, whom he shall acknowledge and increase with glory: and he shall cause them to rule over many, and shall divide the land for gain.

Daniel 11:40 And at the time of the end shall the king of the south push at him: and the king of the north shall come against him like a whirlwind, with chariots, and with horsemen, and with many ships; and he shall enter into the countries, and shall overflow and pass over.

Daniel 8:14 And he said unto me, Unto two thousand and three hundred days; then shall the sanctuary be cleansed.

Revelation 13:3, 10 And I saw one of his heads as it were wounded to death; and his deadly wound was healed: and all the world wondered after the beast...He that leadeth into captivity shall go into captivity: he that killeth with the sword must be killed with the sword. Here is the patience and the faith of the saints.

1 Kings 1:5; 20;1 Then Adonijah the son of Haggith exalted himself, saying, I will be king: and he prepared him chariots and horsemen, and fifty men to run before him... And Benhadad the king of Syria gathered all his host together: and [there were] thirty and two kings with him, and horses, and chariots: and he went up and besieged Samaria, and warred against it.

Isaiah 22:6, 7 And Elam bare the quiver with chariots of men [and] horsemen, and Kir uncovered the shield. And it shall come to pass, [that] thy choicest valleys shall be full of chariots, and the horsemen shall set themselves in array at the gate.

Jeremiah 46:9 Come up, ye horses; and rage, ye chariots; and let the mighty men come forth; the Ethiopians and the Libyans, that handle the shield; and the Lydians, that handle [and] bend the bow.

Ezekiel 39:20 Thus ye shall be filled at my table with horses and chariots, with mighty men, and with all men of war, saith the Lord GOD.

Daniel 8:4 I saw the ram pushing westward, and northward, and southward; so that no beasts might stand before him, neither [was there any] that could deliver out of his hand; but he did according to his will, and became great.

Daniel 11:41 He shall enter also into the glorious land, and many countries shall be overthrown: but these shall escape out of his hand, even Edom, and Moab, and the chief of the children of Ammon.

Revelation 12:6, 14 And the woman fled into the wilderness, where she hath a place prepared of God, that they should feed her there a thousand two hundred [and] threescore days.

Isaiah 11:11-16 And it shall come to pass in that day, [that] the Lord shall set his hand again the second time to recover the remnant of his people, which shall be left, from Assyria, and from Egypt, and from Pathros, and from Cush, and from Elam, and from Shinar, and from Hamath, and from the islands of the sea...And he shall set up an ensign for the nations, and shall assemble the outcasts of Israel, and gather together the dispersed of Judah from the four corners of the earth...The envy also of Ephraim shall depart, and the adversaries of Judah shall be cut off: Ephraim shall not envy Judah, and Judah shall not vex Ephraim...But they shall fly upon the shoulders of the Philistines toward the west; they shall spoil them of the east together: they shall lay their hand upon Edom and Moab; and the children of Ammon shall obey them...And the LORD shall utterly destroy the tongue of the Egyptian sea; and with his mighty wind shall he shake his hand over the river, and shall smite it in the seven streams, and make [men] go over dryshod...And there shall be an highway for the remnant of his people, which shall be left, from Assyria; like as it was to Israel in the day that he came up out of the land of Egypt.

Revelation 17:12 And the ten horns which thou sawest are ten kings, which have received no kingdom as yet; but receive power as kings one hour with the beast.

Revelation 13:3 And I saw one of his heads as it were wounded to death; and his deadly wound was healed: and all the world wondered after the beast.

Daniel 11:43 But he shall have power over the treasures of gold and of silver, and over all the precious things of Egypt: and the Libyans and the Ethiopians shall be at his steps.

Revelation 13:17 And that no man might buy or sell, save he that had the mark, or the name of the beast, or the number of his name.

Daniel 11:44 But tidings out of the east and out of the north shall trouble him: therefore he shall go forth with great fury to destroy, and utterly to make away many.

Ezekiel 43:1, 2 Afterward he brought me to the gate, [even] the gate that looketh toward the east...And, behold, the glory of the God of Israel came from the way of the east: and his voice [was] like a noise of many waters: and the earth shined with his glory.

Revelation 7:1-3 And after these things I saw four angels standing on the four corners of the earth, holding the four winds of the earth, that the wind should not blow on the earth, nor on the sea, nor on any tree...And I saw another angel ascending from the east, having the seal of the living God: and he cried with a loud voice to the four angels, to whom it was given to hurt the earth and the sea...Saying, Hurt not the earth, neither the sea, nor the trees, till we have sealed the servants of our God in their foreheads.

Revelation 16:12 And the sixth angel poured out his vial upon the great river Euphrates; and the water thereof was dried up, that the way of the kings of the east might be prepared.

Psalm 48:1, 2 A Song [and] Psalm for the sons of Korah. Great [is] the LORD, and greatly to be praised in the city of our God, [in] the mountain of his holiness...Beautiful for situation, the joy of the whole earth, [is] mount Zion, [on] the sides of the north, the city of the great King.

Isaiah 14:13 For thou hast said in thine heart, I will ascend into heaven, I will exalt my throne above the stars of God: I will sit also upon the mount of the congregation, in the sides of the north:

Daniel 11:45 And he shall plant the tabernacles of his palace between the seas in the glorious holy mountain; yet he shall come to his end, and none shall help him.

Revelation 17:15 And he saith unto me, The waters which thou sawest, where the whore sitteth, are peoples, and multitudes, and nations, and tongues.

Revelation 12:17 And the dragon was wroth with the woman, and went to make war with the remnant of her seed, which keep the commandments of God, and have the testimony of Jesus Christ.

Revelation 20:2-3 And he laid hold on the dragon, that old serpent, which is the Devil, and Satan, and bound him a thousand years...And cast him into the bottomless pit, and shut him up, and set a seal upon him, that he should deceive the nations no more, till the thousand years should be fulfilled: and after that he must be loosed a little season.

Revelation 20:9 And they went up on the breadth of the earth, and compassed the camp of the saints about, and the beloved city: and fire came down from God out of heaven, and devoured them.