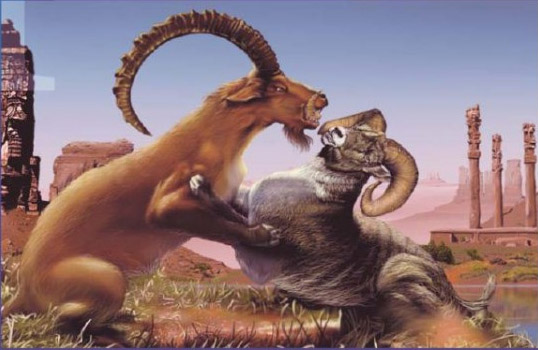 Daniel 8:27 -And I Daniel fainted, and was sick [certain] days; afterward I rose up, and did the king's business; and I was astonished at the vision, but none understood [it].

Daniel 8:3 - Then I lifted up mine eyes, and saw, and, behold, there stood before the river a ram which had [two] horns: and the [two] horns [were] high; but one [was] higher than the other, and the higher came up last.

Symbol: = BEAST
Meaning: = KINGDOM, GOVERNMENT, POLITICAL POWER
Scriptural facts:
Daniel 7:23 -Thus he said, The fourth beast shall be the fourth kingdom upon earth, which shall be diverse from all kingdoms, and shall devour the whole earth, and shall tread it down, and break it in pieces.

Symbol: = HORN
Meaning: #1 = POWER AND STRENGTH
Scriptural facts: Deuteronomy 33:17 -His glory is like the firstling of his bullock, and his horns are like the horns of unicorns: with them he shall push the people together to the ends of the earth: and they are the ten thousands of Ephraim, and they are the thousands of Manasseh.

Meaning: #2 = KING OR KINGDOM
Scriptural facts:
Psalms 89:17, 24 -For thou art the glory of their strength: and in thy favour our horn shall be exalted. But my faithfulness and my mercy shall be with him: and in my name shall his horn be exalted.

Daniel 8:4 -I saw the ram pushing westward, and northward, and southward; so that no beasts might stand before him, neither [was there any] that could deliver out of his hand; but he did according to his will, and became great.

Daniel 8:5 -And as I was considering, behold, an he goat came from the west on the face of the whole earth, and touched not the ground: and the goat [had] a notable horn between his eyes.

Daniel 8:6 -And he came to the ram that had [two] horns, which I had seen standing before the river, and ran unto him in the fury of his power.

Revelation 17:15 -And he saith unto me, The waters which thou sawest, where the whore sitteth, are peoples, and multitudes, and nations, and tongues.

Daniel 8:7 -And I saw him come close unto the ram, and he was moved with choler against him, and smote the ram, and brake his two horns: and there was no power in the ram to stand before him, but he cast him down to the ground, and stamped upon him: and there was none that could deliver the ram out of his hand.

Daniel 8:8 -Therefore the he goat waxed very great: and when he was strong, the great horn was broken; and for it came up four notable ones toward the four winds of heaven.

"The beast had also four heads. The Grecian empire maintained its unity but little longer than the lifetime of Alexander. Within fifteen years after his brilliant career ended in a drunken debauch [323 B.C.]" --Thoughts on Daniel and the Revelation, page 119. See also Cottage Bible notes on this prophecy.

“…the empire was divided among his four leading generals. Cassander had Macedon and Greece in the west; Lysimachus (LYSIMAKUS) had Thrace and the parts of Asia on the Hellespont and Bosporus in the north; Ptolemy (TOLEMY) received Egypt, Lydia, Arabia, Palestine, and Coele-Syria in the south; and Seleucus (SELUCUS) had Syria and all the rest of Alexander's dominions in the east. These divisions were denoted by the four heads of the leopard." --Thoughts on Daniel and the Revelation, page 119. See also Cottage Bible notes on this prophecy.

Daniel 7:7 -After this I saw in the night visions, and behold a fourth beast, dreadful and terrible, and strong exceedingly; and it had great iron teeth: it devoured and brake in pieces, and stamped the residue with the feet of it: and it [was] diverse from all the beasts that [were] before it; and it had ten horns.

Daniel 2:43 -And whereas thou sawest iron mixed with miry clay, they shall mingle themselves with the seed of men: but they shall not cleave one to another, even as iron is not mixed with clay.

Revelation 17:1-2 -And there came one of the seven angels which had the seven vials, and talked with me, saying unto me, Come hither; I will show unto thee the judgment of the great whore that sitteth upon many waters: With whom the kings of the earth have committed fornication, and the inhabitants of the earth have been made drunk with the wine of her fornication.

Daniel 8:10 -And it waxed great, [even] to the host of heaven; and it cast down [some] of the host and of the stars to the ground, and stamped upon them.

Daniel 8:11 -Yea, he magnified [himself] even to the prince of the host, and by him the daily [sacrifice] was taken away, and the place of his sanctuary was cast down.

Daniel 2:40-43 -And the fourth kingdom shall be strong as iron: forasmuch as iron breaketh in pieces and subdueth all [things]: and as iron that breaketh all these, shall it break in pieces and bruise. And whereas thou sawest the feet and toes, part of potters' clay, and part of iron, the kingdom shall be divided; but there shall be in it of the strength of the iron, forasmuch as thou sawest the iron mixed with miry clay.  And [as] the toes of the feet [were] part of iron, and part of clay, [so] the kingdom shall be partly strong, and partly broken. And whereas thou sawest iron mixed with miry clay, they shall mingle themselves with the seed of men: but they shall not cleave one to another, even as iron is not mixed with clay.

Daniel 7:8 -I considered the horns, and, behold, there came up among them another little horn, before whom there were three of the first horns plucked up by the roots: and, behold, in this horn [were] eyes like the eyes of man, and a mouth speaking great things.

2 Thessalonians 2:4 -Who opposeth and exalteth himself above all that is called God, or that is worshipped; so that he as God sitteth in the temple of God, shewing himself that he is God.

•              Pontifix Maximus is a papal title meaning in Latin "chief bridge maker" between earth and heaven. However, Jesus Christ is the only One who can claim this title because "no man cometh unto the Father, but by me." John 14:6. This was a title of the Roman Caesars and of the Roman Emperors of paganism.

•              Holy Father is a title the pope claims for himself. However, this title occurs only once in the Bible, and used when Jesus addresses His Heavenly Father in John 17:11 in His great prayer before His betrayal, arrest and crucifixion.

•              Father is a title that every Roman Catholic priest claims for himself and expects to be called. Jesus warns in Matthew 23:9 "Call no man your father upon the earth: for one is your father which is in heaven." The catholic priest is not regarded in Scripture to be anyone's spiritual father.

•              Reverend is a title of many Roman Catholic priests and Protestant ministers. This is also a title for God in Psalms 111:9 "Holy and Reverend is his name." It is blasphemy for any man to take to himself a title of God.

"Hence the Pope is crowned with a triple crown, as king of heaven and of earth and of the lower regions (infernorum)." -Lucius Ferraris, «Prompta Bibliotheca», 1763, Volume VI, 'Papa II', p.26)

Matthew 2:5-12 -When Jesus saw their faith, he said unto the sick of the palsy, Son, thy sins be forgiven thee.  But there were certain of the scribes sitting there, and reasoning in their hearts, Why doth this [man] thus speak blasphemies? who can forgive sins but God only? And immediately when Jesus perceived in his spirit that they so reasoned within themselves, he said unto them, Why reason ye these things in your hearts?  Whether is it easier to say to the sick of the palsy, [Thy] sins be forgiven thee; or to say, Arise, and take up thy bed, and walk? But that ye may know that the Son of man hath power on earth to forgive sins, (he saith to the sick of the palsy,) I say unto thee, Arise, and take up thy bed, and go thy way into thine house. And immediately he arose, took up the bed, and went forth before them all; insomuch that they were all amazed, and glorified God, saying, We never saw it on this fashion.

“The priest does not only declare that the sinner is forgiven, but he really forgives him...so great is the power of the priest, that the judgments of heaven itself are subject to his decision.” The Catholic Priest, by Michael Meuller, Kreuzer Bros., 1876.

***"Don't go to God for forgiveness of sins, come to me." -Pope John Paul II, LA Times, 12-12-1984
"And God himself is obliged to abide by the judgment of his priest and either not to pardon or to pardon, according as they refuse to give absolution, provided the penitent is capable of it." -Liguori, «Duties and Dignities of the Priest», p.27
"This judicial authority will even include the power to forgive sin." [The Catholic Encyclopaedia Vol xii, article ‘Pope’ pg 265]
"the poor sinner kneels at his confessor's feet. He KNOWS he is not speaking to an ordinary man but to 'ANOTHER CHRIST,' He hears the words: 'I absolve thy sins..." and the HIDEOUS LOAD OF SINS DROPS FROM HIS SOUL FOREVER." -William Doyle "Shall I be a priest" pp 14, 15

Isaiah 58:12 -And [they that shall be] of thee shall build the old waste places: thou shalt raise up the foundations of many generations; and thou shalt be called, The repairer of the breach, The restorer of paths to dwell in.