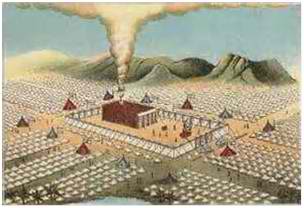 cleansing of the sanctuary

Daniel 8:11 -Yea, he magnified [himself] even to the prince of the host, and by him the daily [sacrifice] was taken away, and the place of his sanctuary was cast down.

Daniel 2:43 -And whereas thou sawest iron mixed with miry clay, they shall mingle themselves with the seed of men: but they shall not cleave one to another, even as iron is not mixed with clay.

Daniel 8:12-13 -And an host was given [him] against the daily [sacrifice] by reason of transgression, and it cast down the truth to the ground; and it practiced, and prospered. Then I heard one saint speaking, and another saint said unto that certain [saint] which spake, How long [shall be] the vision [concerning] the daily [sacrifice], and the transgression of desolation, to give both the sanctuary and the host to be trodden under foot?

Revelation 17:11 -And the beast that was, and is not, even he is the eighth, and is of the seven, and goeth into perdition.

Daniel 8:14 -And he said unto me, Unto two thousand and three hundred days; then shall the sanctuary be cleansed.

Ezekiel 4:6 -And when thou hast accomplished them, lie again on thy right side, and thou shalt bear the iniquity of the house of Judah forty days: I have appointed thee each day for a year.

Hebrews 9:9, 23 - Which [was] a figure for the time then present, in which were offered both gifts and sacrifices, that could not make him that did the service perfect, as pertaining to the conscience;… [It was] therefore necessary that the patterns of things in the heavens should be purified with these; but the heavenly things themselves with better sacrifices than these.

Hebrews 8:2 – A minister of the sanctuary, and of the true tabernacle, which the Lord pitched, and not man.

Revelation 4:5 -And out of the throne proceeded lightnings and thunderings and voices: and [there were] seven lamps of fire burning before the throne, which are the seven Spirits of God.

Revelation  11:19 -And the temple of God was opened in heaven, and there was seen in his temple the ark of his testament: and there were lightnings, and voices, and thunderings, and an earthquake, and great hail.

Revelation 15:8 -And the temple was filled with smoke from the glory of God, and from his power; and no man was able to enter into the temple, till the seven plagues of the seven angels were fulfilled.

Revelation 8:4 -And the smoke of the incense, [which came] with the prayers of the saints, ascended up before God out of the angel's hand.

Hebrews 9:24 -For Christ is not entered into the holy places made with hands, [which are] the figures of the true; but into heaven itself, now to appear in the presence of God for us:

Revelation 20:12 -And I saw the dead, small and great, stand before God; and the books were opened: and another book was opened, which is [the book] of life: and the dead were judged out of those things which were written in the books, according to their works.

Micah 7:18, 19 -Who [is] a God like unto thee, that pardoneth iniquity, and passeth by the transgression of the remnant of his heritage? he retaineth not his anger for ever, because he delighteth [in] mercy. He will turn again, he will have compassion upon us; he will subdue our iniquities; and thou wilt cast all their sins into the depths of the sea.

Isaiah 1:18-20 -Come now, and let us reason together, saith the LORD: though your sins be as scarlet, they shall be as white as snow; though they be red like crimson, they shall be as wool. If ye be willing and obedient, ye shall eat the good of the land: But if ye refuse and rebel, ye shall be devoured with the sword: for the mouth of the LORD hath spoken [it].

James 2:18-26 -Yea, a man may say, Thou hast faith, and I have works: show me thy faith without thy works, and I will show thee my faith by my works. Thou believest that there is one God; thou doest well: the devils also believe, and tremble. But wilt thou know, O vain man, that faith without works is dead? Was not Abraham our father justified by works, when he had offered Isaac his son upon the altar? Seest thou how faith wrought with his works, and by works was faith made perfect? And the scripture was fulfilled which saith, Abraham believed God, and it was imputed unto him for righteousness: and he was called the Friend of God. Ye see then how that by works a man is justified, and not by faith only. Likewise also was not Rahab the harlot justified by works, when she had received the messengers, and had sent [them] out another way? For as the body without the spirit is dead, so faith without works is dead also.

Leviticus 23:28-32 -And ye shall do no work in that same day: for it [is] a day of atonement, to make an atonement for you before the LORD your God. For whatsoever soul [it be] that shall not be afflicted in that same day, he shall be cut off from among his people. And whatsoever soul [it be] that doeth any work in that same day, the same soul will I destroy from among his people. Ye shall do no manner of work: [it shall be] a statute for ever throughout your generations in all your dwellings. It [shall be] unto you a sabbath of rest, and ye shall afflict your souls: in the ninth [day] of the month at even, from even unto even, shall ye celebrate your sabbath.

James 4:7-10 -Submit yourselves therefore to God. Resist the devil, and he will flee from you. Draw nigh to God, and he will draw nigh to you. Cleanse [your] hands, [ye] sinners; and purify [your] hearts, [ye] double minded. Be afflicted, and mourn, and weep: let your laughter be turned to mourning, and [your] joy to heaviness.  Humble yourselves in the sight of the Lord, and he shall lift you up.

Ephesians 5:27 -That he might present it to himself a glorious church, not having spot, or wrinkle, or any such thing; but that it should be holy and without blemish.

1 Peter 2:21-22 -For even hereunto were ye called: because Christ also suffered for us, leaving us an example, that ye should follow his steps: Who did no sin, neither was guile found in his mouth:

1 Peter 1:19 -But with the precious blood of Christ, as of a lamb without blemish and without spot.

1 Thessalonians 5:2-3 -For yourselves know perfectly that the day of the Lord so cometh as a thief in the night.  For when they shall say, Peace and safety; then sudden destruction cometh upon them, as travail upon a woman with child; and they shall not escape.

Daniel 8:15 -And it came to pass, when I, [even] I Daniel, had seen the vision, and sought for the meaning, then, behold, there stood before me as the appearance of a man.

Daniel 8:16 -And I heard a man's voice between [the banks of] Ulai, which called, and said, Gabriel, make this [man] to understand the vision.

Luke 1:19 -And the angel answering said unto him, I am Gabriel, that stand in the presence of God; and am sent to speak unto thee, and to show thee these glad tidings.

Daniel 8:17 -So he came near where I stood: and when he came, I was afraid, and fell upon my face: but he said unto me, Understand, O son of man: for at the time of the end [shall be] the vision.

Daniel 8:18 -Now as he was speaking with me, I was in a deep sleep on my face toward the ground: but he touched me, and set me upright.

Daniel 8:19 -And he said, Behold, I will make thee know what shall be in the last end of the indignation: for at the time appointed the end [shall be].

Daniel 8:20 -The ram which thou sawest having [two] horns [are] the kings of Media and Persia.

Daniel 8:21 -And the rough goat [is] the king of Grecia: and the great horn that [is] between his eyes [is] the first king.

Daniel 8:22 -Now that being broken, whereas four stood up for it, four kingdoms shall stand up out of the nation, but not in his power.

Daniel 8:23 -And in the latter time of their kingdom, when the transgressors are come to the full, a king of fierce countenance, and understanding dark sentences, shall stand up.

Daniel 8:25 -And through his policy also he shall cause craft to prosper in his hand; and he shall magnify [himself] in his heart, and by peace shall destroy many: he shall also stand up against the Prince of princes; but he shall be broken without hand.

Daniel 8:26 -And the vision of the evening and the morning which was told [is] true: wherefore shut thou up the vision; for it [shall be] for many days.

Daniel 8:27 -And I Daniel fainted, and was sick [certain] days; afterward I rose up, and did the king's business; and I was astonished at the vision, but none understood [it].