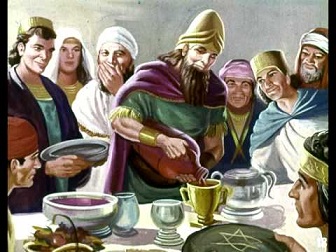 Luke 12:15 -And he said unto them, Take heed, and beware of covetousness: for a man's life consisteth not in the abundance of the things which he possesseth.

John 15:12-13 This is my commandment, That ye love one another, as I have loved you. Greater love hath no man than this, that a man lay down his life for his friends.

Daniel 3:19 Then was Nebuchadnezzar full of fury, and the form of his visage was changed against Shadrach, Meshach, and Abednego: [therefore] he spake, and commanded that they should heat the furnace one seven times more than it was wont to be heated.

Job 4:8 Even as I have seen, they that plow iniquity, and sow wickedness, reap the same.

Matthew 7:12 Therefore all things whatsoever ye would that men should do to you, do ye even so to them: for this is the law and the prophets.

Daniel 4:31-33 While the word [was] in the king's mouth, there fell a voice from heaven, [saying], O king Nebuchadnezzar, to thee it is spoken; The kingdom is departed from thee. And they shall drive thee from men, and thy dwelling [shall be] with the beasts of the field: they shall make thee to eat grass as oxen, and seven times shall pass over thee, until thou know that the most High ruleth in the kingdom of men, and giveth it to whomsoever he will. The same hour was the thing fulfilled upon Nebuchadnezzar: and he was driven from men, and did eat grass as oxen, and his body was wet with the dew of heaven, till his hairs were grown like eagles' [feathers], and his nails like birds' [claws].

Daniel 3:22 Therefore because the king's commandment was urgent, and the furnace exceeding hot, the flame of the fire slew those men that took up Shadrach, Meshach, and Abednego.

Daniel
6:1          It pleased Darius to set over the kingdom an hundred and twenty princes, which should be over the whole kingdom;
6:2         And over these three presidents; of whom Daniel [was] first: that the princes might give accounts unto them, and the king should have no damage.
6:3         Then this Daniel was preferred above the presidents and princes, because an excellent spirit [was] in him; and the king thought to set him over the whole realm.

Daniel  6:4  Then the presidents and princes sought to find occasion against Daniel concerning the kingdom; but they could find none occasion nor fault; forasmuch as he [was] faithful, neither was there any error or fault found in him.

Ephesians 4:32 And be ye kind one to another, tenderhearted, forgiving one another, even as God for Christ's sake hath forgiven you.

Daniel  6:5 Then said these men, We shall not find any occasion against this Daniel, except we find [it] against him concerning the law of his God.

6:6         Then these presidents and princes assembled together to the king, and said thus unto him, King Darius, live for ever.
6:7         All the presidents of the kingdom, the governors, and the princes, the counsellors, and the captains, have consulted together to establish a royal statute, and to make a firm decree, that whosoever shall ask a petition of any God or man for thirty days, save of thee, O king, he shall be cast into the den of lions.
6:8         Now, O king, establish the decree, and sign the writing, that it be not changed, according to the law of the Medes and Persians, which altereth not.
6:9         Wherefore king Darius signed the writing and the decree.

Daniel  6:10  Now when Daniel knew that the writing was signed, he went into his house; and his windows being open in his chamber toward Jerusalem, he kneeled upon his knees three times a day, and prayed, and gave thanks before his God, as he did aforetime.

Daniel 6:11 Then these men assembled, and found Daniel praying and making supplication before his God.

Daniel 6:12 Then they came near, and spake before the king concerning the king's decree; Hast thou not signed a decree, that every man that shall ask [a petition] of any God or man within thirty days, save of thee, O king, shall be cast into the den of lions? The king answered and said, The thing [is] true, according to the law of the Medes and Persians, which altereth not.

Daniel 6:13 Then answered they and said before the king, That Daniel, which [is] of the children of the captivity of Judah, regardeth not thee, O king, nor the decree that thou hast signed, but maketh his petition three times a day.

Daniel 6:14 Then the king, when he heard [these] words, was sore displeased with himself, and set [his] heart on Daniel to deliver him: and he laboured till the going down of the sun to deliver him.

Daniel 6:15 Then these men assembled unto the king, and said unto the king, Know, O king, that the law of the Medes and Persians [is], That no decree nor statute which the king establisheth may be changed.

Daniel 6:16 Then the king commanded, and they brought Daniel, and cast [him] into the den of lions. [Now] the king spake and said unto Daniel, Thy God whom thou servest continually, he will deliver thee.

Daniel 6:17 And a stone was brought, and laid upon the mouth of the den; and the king sealed it with his own signet, and with the signet of his lords; that the purpose might not be changed concerning Daniel.

Daniel 6:18 Then the king went to his palace, and passed the night fasting: neither were instruments of music brought before him: and his sleep went from him.

Daniel 6:19 Then the king arose very early in the morning, and went in haste unto the den of lions.

Daniel 6:20 And when he came to the den, he cried with a lamentable voice unto Daniel: [and] the king spake and said to Daniel, O Daniel, servant of the living God, is thy God, whom thou servest continually, able to deliver thee from the lions?

Daniel 6:21 Then said Daniel unto the king, O king, live for ever.